The Dollar breaks out against Euro as ECB flips

On Thursday the ECB flipped.

After Powell lead the way in January it was about time for Mario to follow suit. After announcing a few dovish policy decisions and most notably that rates would remain unchanged until the end of 2019, the Euro sank to levels from June 2017.

The Dollar Currency Index ripped through $97 to touch $97.70, a technical resistance present from last year.

DXY, of which 57.6% is Euro/Dollar, is now at a break-it or make-it point. A breakout could mean $100-103, or a selloff back to the trading range support near $95-96. While I’m by no means super bullish on the Dollar right now, it may be a “best of the worst” situation, as US economic growth remains strong relative to Europe and Asia. The ECB now seems to be more dovish than the Fed, and with the EuroZone growth revisions (1.1 from 1.7%) its no surprise.

To me, it looks as if the Euro is about to fall off a cliff. I cant imagine looking at this chart and being bullish.. 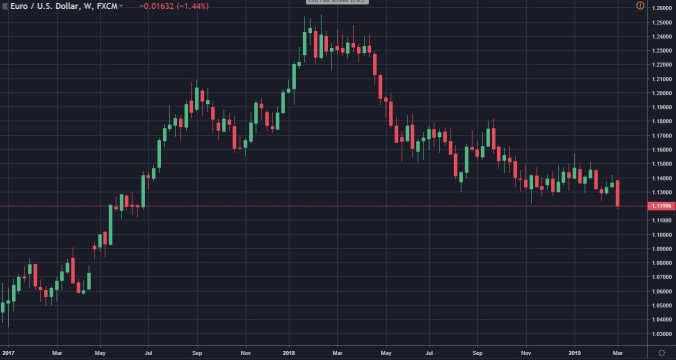 Interestingly, as the Dollar took off through $97 Gold had little price action. Possibly due to the recent selloff from $1345 to $1285. Maybe Gold is sitting at a comfortable support for now?

If we don’t see a breakout move in the Dollar in the next couple days, and if in fact it once again turns to selling, Gold at these levels looks attractive. It might be telling that the correlation is breaking down. A prophet once told of Gold and Dollar rising at the same time… 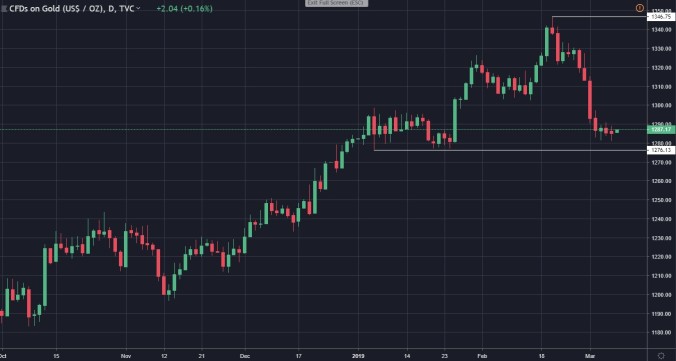