Is this how we bottom? I don’t think so.

We know that bear markets are filled with face ripping rallies which eventually get faded, could this be the Ultimate Short Setup?

There seem to be a few main factors the markets are trading off:

As for a trade deal with China: Xi has no term limit on his presidency and it seems unlikely hes going to agree to any major concessions anytime soon. Trump has less than 2 years to make this fight worth it, or at least give the impression of a win. He’s almost staked his presidency on this battle, and it seems unlikely hes going to settle for some extra soybean purchases.

The recent news that China has offered a deal aiming to eliminate its trade surplus with the US by 2024 is a pipe dream and mostly unachievable. See This Bloomberg piece for more detail.

Lets say for the bullish sake that China does agree to some major concessions and Trump gets to waive a victory flag, IMO its going to be a Sell-the-Headline event. Xi is not going to give up power and bend a knee to Trump so any deal will most likely be superficial and the market will see right through as soon as the dust clears.

The Fed: It now seems more than likely Powell is going to pause hiking rates during the next FOMC conference on Jan 30th. I don’t quite see how this is long term bullish for risk assets…

Is there something wrong Powell? Because it seems to me like a pause would indicate some worry.

Even if we get the Powell Put I cant help but think the cat is out of the bag for risk assets and we haven’t seen the lows.

Global growth data: I think this is going to be a large factor on risk assets in the coming year. It seems like every pundit is now calling the end to the business cycle and recessions looming in the near distance. While I believe we are heading for economic slowdown it could surprise to the upside.

Real question is if we see recessionary environments in Europe and China how much effect do the inevitable stimulus packages serve?

I still think valuations are stretched and we are ripe for some real capitulation. Of course I could be wrong.. and we could see SPX 3000+ by year end. 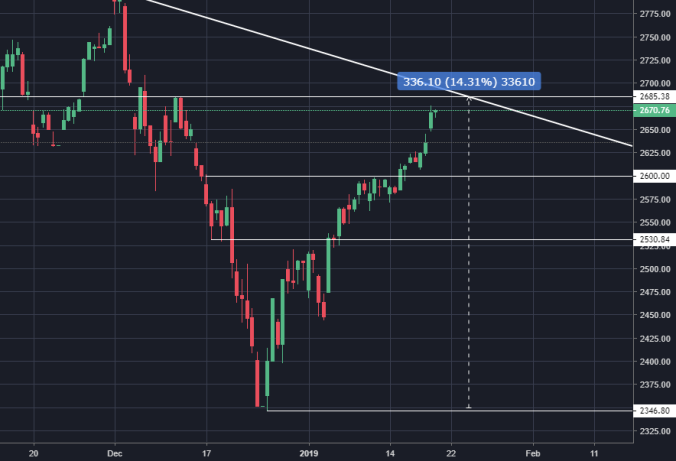 While the previous major resistance level around 2600 was taken out, I am looking at 2680-2700 for a topping formation. After a 14% rally, were probably due for some selling…

…and if this is a bear market and we see capitulation on the horizon, this will be the Ultimate Short Setup. But of course markets are never that easy..

I’m waiting for a confirmation before placing my bets.